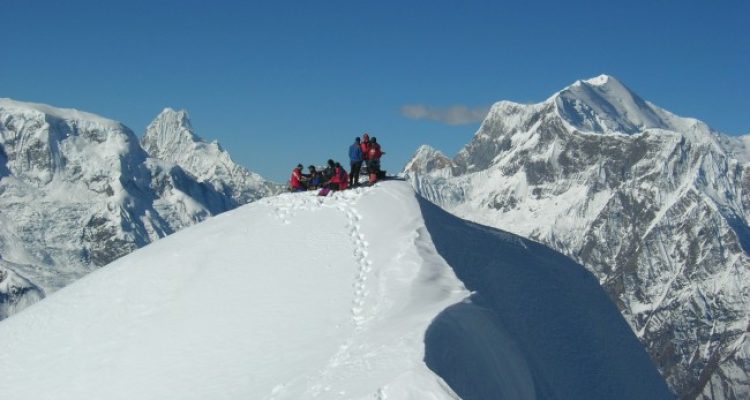 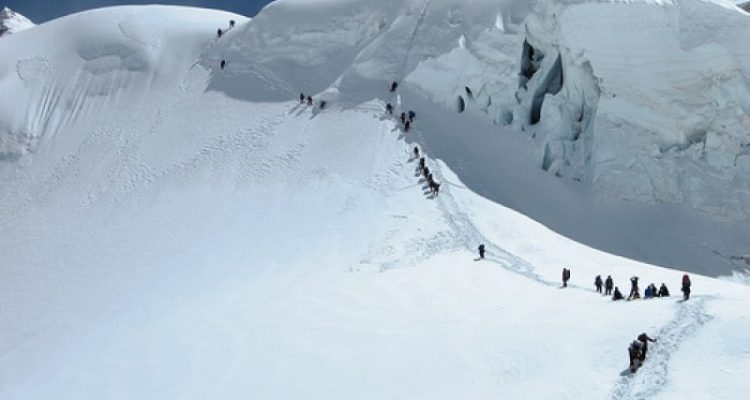 A fully fledged Mountaineering adventure on world seventh highest peak
On remote areas of Himalaya of Western Nepal with action packed thrill.
Walking from semi-tropic to alpine hills and ending at remorseless ice-fields.
Enchanting alpine forest with daily views of scenic mountains An expeditions with Semi-Circuit of around Dhaulagiri to Kaligandaki valley.

View Nepal Treks runs Dhaulagiri Expeditions with well-planned researching possible best route for the safe climb using our veteran mountaineering Sherpa guide who has climbed the mountains several times and as well other higher peaks around Nepal and Tibet Himalaya.

Mt. Dhaulagiri stands as world seventh highest at 8,167 m within great and massive Dhaulagiri range of mountains in the Mid – West North of Nepal situated at 28 41 46 Latitude and 83 29 43 Longitude.

This is a great mountaineering and very varied trek and expedition includes best of almost all Expeditions environments that Nepal has to offer, from fertile and relatively low farmlands towards arid and barren treeless valleys.

From the dense forests of lower semi-tropical part of the valley to the high snow-crested ridge and remorseless ice field and glaciers, includes excellent and rare views of both Dhaulagiri and Annapurna mountains massifs range.

Mt. Dhaulagiri Expeditions designed with proper planning, enough rest days for acclimatization and climbing practices before the final ascent to the summit of Mt. Dhaulagiri with the full support of View Nepal expert guides and staff.

At Kathmandu Tribhuvan International Airport, received by View Nepal staff with transfer to respective hotels in the hub of Kathmandu city, after a rest and getting refreshed from jet lag.

View Nepal guide / leader will brief on Dhaulagiri Expeditions including information on hotels, lodges and camping on treks with welcome dinner in a nice Nepalese restaurant with cultural environment.

Day 02 - 03: In Kathmandu preparations for the expedition and optional tour.

These two days you will be fully engrossed with preparation for Dhaulagiri Expeditions and other related activities, includes final briefing and orientation program on trek and climb and knowing each member of the team including guides and other staff.

We have reserved two days to provide enough time for packing and buying extra gears or shopping for the expeditions. View Nepal office and field staff along with leader of the team will use this day to obtain permits and necessary documents for the climb of Mt. Dhaulagiri.

Morning, we start this wonderful adventure to Dhaulagiri Expeditions taking a scenic overland drive of near 6 hours to beautiful Pokhara city with its serene Phewa and Begnas Lakes where the high Annapurna Himalaya reflects on its pristine lakes.

From Pokhara, our journey continues on drive to Beni town and beyond to a farming town at Darbang, the starting point of Dhaualgiri-Dhorpatan and Dolpo trekking. At Darbang time permitting we might walk for few hours to another overnight stop by the river to make the next day walk more easy, or just stay at Darbang in a local lodge.

First day walk of this adventure starts with a climb over a steep ridge, walking past farm villages and then on pleasant trail along Myagdi River, we follow the river right to its glacier source at Dhaulagiri base camp.

After a good walk reaching our first overnight camp by the river, after noon at leisure with rest or get cooled in the river.

Morning walk follows the river for short while reaching a farm village at Jugepani for possible lunch stop, after a rest then leading to a steep climb above a ridge and then downhill through forest to camp at Bagar, a farm village.

Bagar will be last village till walk joins at popular Kaligandaki route at Marpha.

On leaving the last of farm fields at Bagar village walk into forest for an hour and then a climb into forested area of bamboo, oaks and rhododendron trees.

After climb then descend to reach at Dovan for overnight camp, Dovan a small temporary settlement with small teahouse and shops.

From Dovan morning walk leads to an unstable wooden bridge over a stream at a confluence of Mygdi River, after crossing walking into forest all the way to overnight stop at Chartare also called Bhainse Kharka.

After overnight in the middle of dense forest, today walk leads to complete wilderness on leaving the vegetation and tree lines for few days.

Morning walk follows moraine and iceberg in some section, this morning climb needs a good team work with guides, porters and fellow members to be on right side of the trail over glaciated sections. After a tough walk over glacial section reaching a rocky open area around Dhaulagiri where base camp is located.

Two days at leisure free with optional local hike and preparation for the climb to the summit of Dhaulagiri.

The walk leads to a descent to the Dhaulagiri glacier for a while on the rumble of moraine rocks and with a slow climb towards the Dhaulagiri’s icefall then scouting the area to establish Advance Camp on the safe sheltered spot free from the danger of avalanche and rock fall.

From base camp walk and cross a high plateau and then skirt around a ridge of lateral moraine heading towards at the foot of Mt. Dhaualgiri, then after 4 hours of good walk with steep climb reaching high areas where a suitable camp site to set our Advance Camp.

Day 16 - 32: Ascent to the summit of Dhaulagiri of 17 days climb and preparations.

We have reserved 17 days for the summit bid and preparations to ferry the camping and climbing load to higher specific camp. From Advance Camp minimum 2 or 3 camps will be needed, as this North West Route is the most accessible way to the summit than any other route on this world’s seventh highest Mountain.

From ABC with final preparation to Dhaulagiri summit after much preparation, where our expedition leader will control the daily routine of the expedition, normally establish camp I, at above 5,350 meters and camp II, at above 6,800 m before returning to Advance Base Camp for rest and final bid to the summit top.

Our team of climbing Sherpa will establish camp III, at above 7,200 meters with members sleeping only one night at this top camp before heading to the summit top.

From Advance Base Camp walk and climb through moraine covered glacier with climb and to Camp I at 5,350 meters, after climbing on boulders of rocks and ice with scree slope to reach the required Camp I.

At about 7,200 meters the ridge is a line of ice cliffs here fixing ropes and snow bars. Normally we will have one rope for the ascent and another for descent on this pitch, which is about 80 meters high.

This is the toughest part of the climb but with less difficulty, high above the serac climb out onto a plateau cut by huge crevasses, a winding path between to pitch Camp II at about 6, 800 meters.

Above Camp II broad snow slopes lead more easily to Camp III at 7,200 meters. This is the highest camp and make the summit bid from here. Summit day as always involves an early start. Depending on snow conditions might encounter some easy scrambling as the climb gets in progress making way up and across the low angled North Face.

The top of the summit a small plateau offering views of Annapurna-Mustang Himal with adjoining peaks of Dhaulagiri range with Lamjung and Manaslu towards eastern horizon. After a successful climb feeling high on top of the world, and then head back to ABC depending upon fitness of the members on descend after a vigorous to reach world 7th highest summit.

After a triumph and success we have reserved to reach at base camp with two days, as well clearing up above camps, on these two days all the climbing members and staffs should be at the Base Camp for the return trip and packing.

At base camp with final packing and checking on members health and fitness, a necessary day for the clean up at the Base Camp.

From this unique and wonderful campsite morning walk leads to the highest point of the adventure of trekking over French pass at 5,360 meters.

After the high pass a short descend to reach a wide grassy meadow a huge field at hidden valley for overnight camp. Offering views of Sita Chuchura, Mukut Himal, and Tashi Kang 5,386 meters, Tukche Peak and Dhaulagiri I.

After a pleasant rest, morning starts on a gentle path for few hours to reach last pass of this adventure at Thapa also called Dhampus pass with 5,244 meters high.

On reaching the pass with grand rare views of Annapurna Himal, Nilgiris peaks, and then our walk descend to Yak Kharka for overnight camp and back into green vegetation of Juniper, Burberry and rhododendron bushes.

Morning walk with long descend back into villages, after being in complete wilderness for past few days. downhill walk into forest of firs, pines and rhododendron trees, after few hours of easy descend reaching at one of the charming village at Marpha where all houses are painted white, this gem of a village with an interesting monastery.

Marpha located in lower Mustang district around Kaligandaki river valley, this area famous for delicious apples and product like cider, brandy local brew, juices, dry apples and apricot fruits. Enjoy the afternoon in the comfort of nice lodges and explore this beautiful village.

Day 39: Drive back to Pokhara via Beni.

After packing all the stuff and equipment board on the Jeep or Bus for the long scenic drive of 6-7 hours to Pokhara on arrival check into respective Hotel by the Lake Phewa.

Day 40: Drive or fly back to Kathmandu.

Morning a scenic drive to Kathmandu, after a wonderful memorable adventure on world 7th highest mountains expeditions to Mt. Dhaulagiri, on reaching Kathmandu transfer to respective hotels with afternoon free at leisure.

A free and leisure day in Kathmandu after an adventurous journey and tough trekking and Dhaulagiri expeditions, on this day if interested book for sightseeing tour around places of interest in Kathmandu-Bhaktapur or Patan with rest of the day free for individual activities and shopping souvenirs.

Today, last day in Nepal with great experience and fond memories of Dhaulagiri Expeditions and tough trekking around Hidden Valley, as per your time for international flight, View Nepal staff transfer you to airport for your final departure homeward bound or to your next destinations.