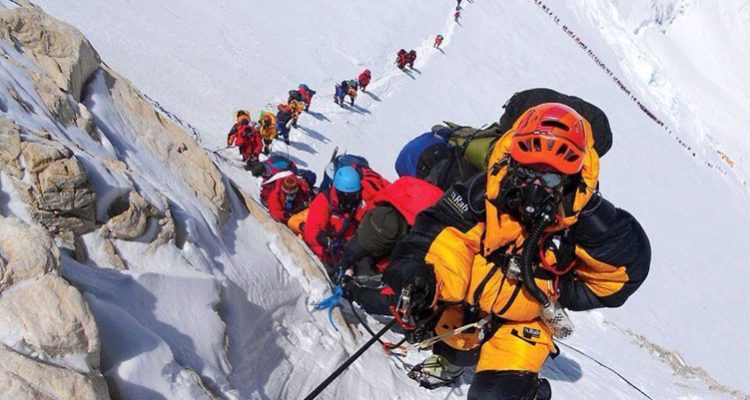 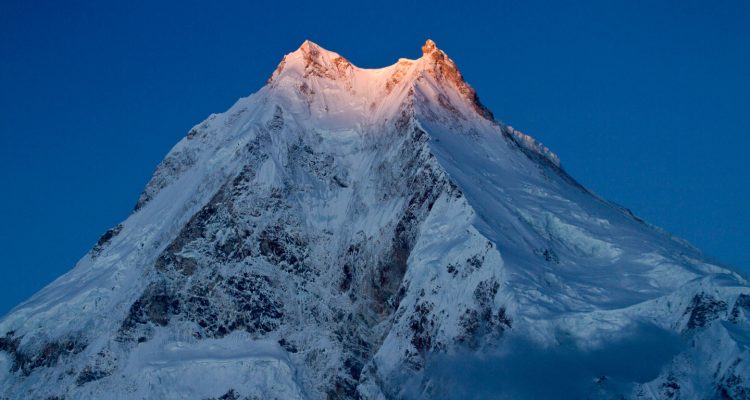 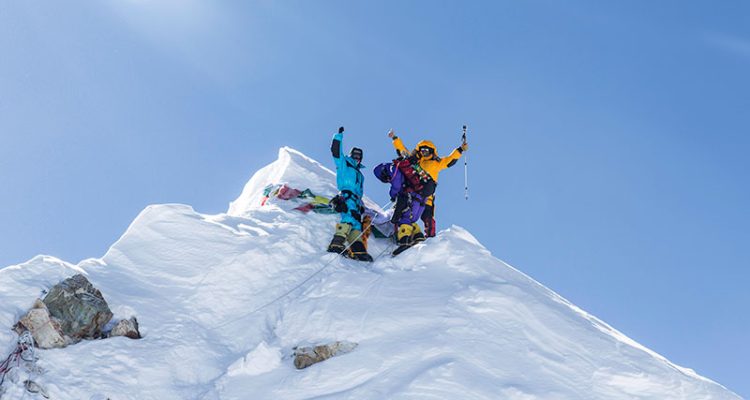 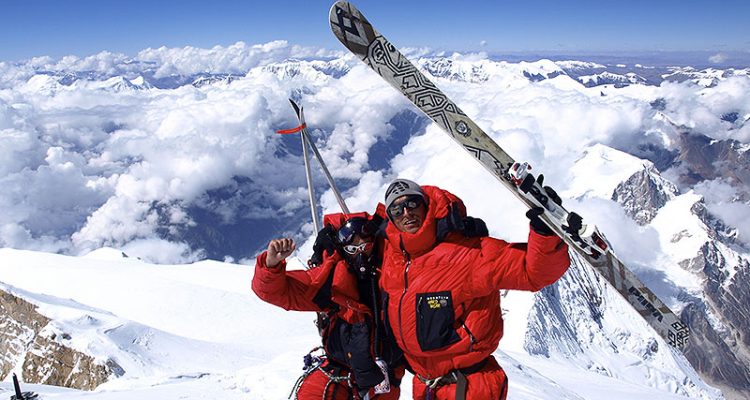 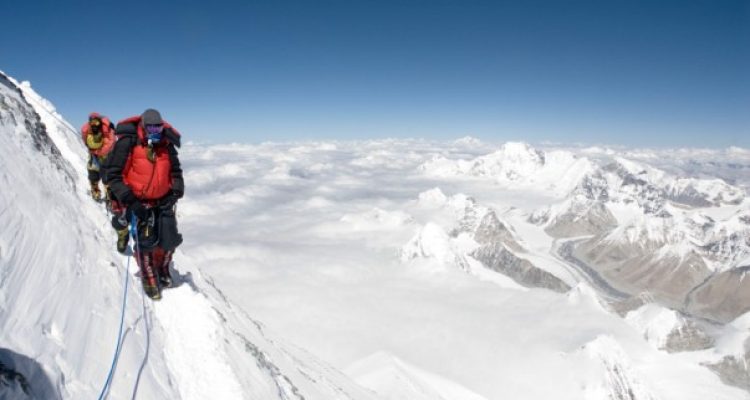 An overwhelming adventure and climb of Mt. Manaslu Expeditions around far and remote areas of Nepal’s North Mid West Himalaya.

Manaslu region situated in the central Nepal was opened to western adventures in 1991 but the Mountain itself had been open for the Mountaineering Expeditions since 1950’s till today. The pioneer headed by H.W. Tilman trekked this region in 1950.

Mt. Manaslu also known as Kutang in Tibetan and local language, and the word Manaslu derived from Sanskrit “Manas” meaning ‘spirit of the mountain or the soul’ (like the Lake Manasarover in Kailash, Tibet).

Located east from the Annapurna and west from Ganesh and Langtang Himal, the area is still restricted to limited number of trekkers and it has to be through a proper trekking organization.

This region is spectacular with beautiful landscapes culturally fascinating. The locals of this upper area are of Tibetan origin and for native trader it is just day walk to Tibet frontier.

Our Mt. Manaslu Expeditions designed with proper planning, enough rest days for acclimatization and climbing practices before the final ascent to the summit of Mt. Manaslu with full support of View Nepal expert guides and staff.

At Kathmandu Tribhuvan International Airport on arrival, received by View Nepal Treks staff and guide and then transfer to your hotels in Kathmandu city. After getting refreshed from jet lag, View Nepal guide / leader will brief on Manaslu Expeditions, trekking, including hotels, lodge on route with evening welcome dinner in a nice Nepalese restaurant.

Day 02: In Kathmandu with sightseeing tour at places of interest.

These two days you will be fully engrossed with preparation for Manaslu Expeditions and other related activities, includes final briefing and orientation program on trek and climb and knowing each member of the team including guides and other staff.

We have reserved two days to provide enough time for packing and buying extra gears or shopping for the expeditions. View Nepal office and field staff along with leader of the team will use this day to obtain permits and necessary documentation for the climb of Mt. Manaslu.

Starting this wonderful journey to Manaslu Himal taking a morning drive on the main road for few hours, and then over Trisuli River to reach at Dhading Besi, a hill town, from here on the dirt / rough road to Arughat bazaar.

From here transfer to another vehicle taking a rough drive on dirt road to Soti Khola passing several villages and farm areas, with views of Mt. Manaslu driving ups and downs till Soti Khola is reached for overnight stop.

From this village, first day walk starts on a good trail following Buri Gandaki River, passing farm land and villages, and then crossing a bridge over Nuali khola with nice views of waterfalls.

Walk leads on neat stone steps with another bridge to cross to reach Machha-Khola for overnight stop, this village named as Machha- Khola which means a Fish streams.

From Jagat continue walk to higher area still following Buri Gandkai River, coming across small farm village of Sidibas Bazaar, a lovely neat village with rest here a short climb and downhill to cross a suspension bridge to reach at Nagjet. From here climb up to Philim, this is quite a large village with scattered farm houses, after Philim trek onwards through farm terraces of golden fields of wheat’s and barley, then climb a rocky ridge top into bamboo forest to our overnight stop at Dyang village.

After Dyang onward heading to more cooler climate into alpine zone, morning walk continue with descend to a river reaching at Bihi Bazaar. A small village near river side, villages from here higher up with more Tibetan culture of Buddhist religions, walk leads on gradual trail with few short ups and downs till Ghap village for overnight stop.

Morning from Ghap village walk along Budhi Gandaki River, crossing the river through scattered small farm villages and cultivated farm fields of barley, wheat and millets, and then to Numrung village with of Mt. Manaslu North Face, from here continue walk passing villages of Banjham, Lhi and Sho, gaining much altitude with an hour up to Shrip village, from here few hours walk to Lo Bazaar for overnight stop in a nice lodge with local hospitality.

After Lo village, feel the altitude with cool temperature, from here onward tree lines disappears for few short juniper bushes and some Willow and Juniper trees, walk on a nice trail with views of snowcapped peaks and finally reaching a large village of Samagaon for two overnight stops, situated on route Manaslu base camp and Larkya-la.

A necessary rest day for acclimatization before heading higher area and towards Manaslu base camp, on this leisure day explore interesting Samagaon village of typical Tibetan culture and custom, this village lies on the old caravan trade route of Nepal and Tibet.

After a fine rest day at Samagaon, morning walk leads to gradual climb towards Manaslu Base Camp, as paths meanders on a winding track towards south.

As the walk progress with rapid gain in altitude with view of massive range of Manaslu and adjoining peaks, then reaching to our destination at the foot of Mt. Manaslu on a large summer pasture area, where our base camp will be set for the climb.

A necessary rest day for acclimatization and preparations to reach the summit of Mt. Manaslu, here our guide and leader will provide final briefing regarding the climb and technique skill required for the climb.

From base camp walk and cross a high plateau and then skirt around a ridge of lateral moraine heading towards at the foot of Mt. Manaslu, then after 4 hours of good walk with steep climb reaching high areas where a suitable camp site is located to set our Advance Camp.

From ABC with final preparation to Manaslu summit after much preparation, where our expedition leader will control the daily routine of the expedition, normally establish camp I, at 5,260 meters and camp II, at above 5,600 m before returning to Advance Base Camp for rest.

You might find it odd on losing altitude at Camp I and II after ABC as the walk and climb leads to up and down this will make acclimatization better for the climb.

Our team of climbing Sherpa will establish camp III, at above 6,700 meters with members sleeping only one night at this top camp before heading to the summit top.

From Advance Base Camp walk and climb through moraine covered glacier with climb and short descend to Camp I at 5,260 meters. If there’s no snow a steep path leads up to an interminable scree slope which will be much support for the climb.

At about 7,500 meters the ridge is blocked by a line of ice cliffs here fixing ropes and snow bars. Normally we will have one rope for the ascent and another for descent on this pitch, which is about 60 meters high.

This is the toughest part of the climb but with less difficulty, high above the serac climb out onto a plateau cut by huge crevasses, a winding path between to pitch Camp II at about 5,600 meters.

Above Camp II broad snow slopes lead more easily to Camp III at 6,700 meters. This is the highest camp and make the summit bid from here. Summit day as always involves an early start. Depending on snow conditions might encounter some easy scrambling as the climb gets in progress making way up and across the low angled South West Face.

The top of the summit a small plateau offering views of Annapurna-Lamjung and Ganesh Himal with adjoining peaks of Manaslu range Baudha and Himal Chuli. Normally it is possible to descend from the summit all the way to advance base camp on the same day. This will depend on snow conditions and members fitness.

After an incredible adventure and overwhelming experience descend back safely towards Base Camp using few camps on long descend.

View Nepal Treks for your success, reserves an extra 2 days as contingency in case of bad and unfavorable weather condition, or to adjust this day to maintain itinerary days taking care of client’s fitness as well.

If this day not used and if all goes well according to our standard itinerary our guide / leader will use this extra day on return trek to Samagaon and on route to Arughat or Soti-Khola, making short day as you enjoy walks with views on route trekking.

Day 38: Descend back to Base Camp.

After an adventurous and challenging climb return back to Base Camp.
On this day all climbing party and member including guide and staff should have reached at base camp, to assist packing equipments and checking each member health condition after the great classic climb and to organize departure from Manaslu base camp to Kathmandu.

Everything will be packed into the expedition drums for the return journey to Kathmandu. If the road is in good condition it is sometimes possible to go to Kathmandu in one day from the Base Camp. More likely though, we might journey back across Manaslu valley enjoying its interesting culture.

All the Expeditions should be here by now to pack and ferry the load to the road head and to clean the base camp as it was before.

Start packing the climbing gears and disposing garbage in proper sites, where our leader-Government Liaison Officer will check the camp and depositing the litter to take away from the base camp to proper disposal sites or back to Kathmandu. Prepare everything for an early departure the next morning.

After a successful climb of Manaslu and cleaning up the base camp, return trek to Samagaon walking back on route Birendra Tal a glacial lake at an altitude of 3,450 m. From here another two hours walk reaches back at Samagaon for overnight stop in the comfort of nice lodge.

Retrace the journey back to Soti-Khola on downhill route reaching back into warm and semi-tropical area passing interesting villages of Philim and other farm areas of well tended terraces and enjoying hot spring of Tatopani on route Soti-Khola.

Day 45: Drive back to Kathmandu.

After all the packing and reloading the gear in the Truck and Bus return journey is made through Dhading Besi as it is more accessible and shorter reaching Kathmandu on time.

A spare day in Kathmandu in case delay on road conditions due to availability of vehicles to transfer our expeditions gears. If all runs well have a free day or sightseeing tour of Kathmandu-Patan and Bhaktapur.

Today, your last day in amazing Nepal with great experience and fond memories of Mt. Manaslu Expeditions, as per your time for international flight, View Nepal staff transfer you to airport for your final departure homeward bound or to your next destinations.