For exciting elephant safari-jungle drive, nature walks in the comfort of jungle lodge 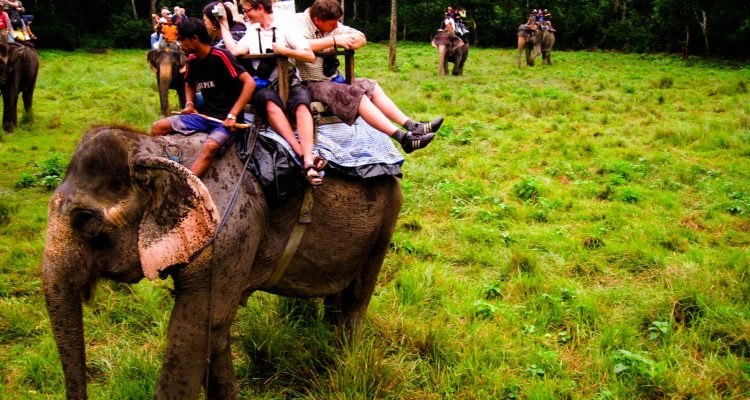 We have Jungle programs with various interesting activities in deep verdant jungles of Terai the flat and low land of Nepal located south East / West of the country.

All parks accessible via overland drive or by air travel.

One of the oldest and most popular National Parks in Nepal is situated within the inner subtropical Terai lowlands of Southern-Central Nepal. The park was designated as a World Heritage Site in 1984. Chitwan also listed as Asia’s best park for viewing games in the comfort of nice hotels, lodge and jungle resorts.

Covering pristine area with a unique eco-system of significant value to the world, it contains the Churia hills, ox-bow lakes and flood plains of the rivers Rapti, Reu and Narayani.

There are more than 43 species of mammals in the park. The Park is famous for the

Other animals found in the park include sambars, chitals (spotted deer) barking deer,

The park is also famous for over 450 species of birds.

Among the endangered birds are the Bengal florican, the Giant Hornbill,

the Lesser Florican, the  Black Stork and   White
Stork.

This Park located in Nepal’s Far South Western Terai, east of Karnali River, and it is one of the largest undisturbed areas of wilderness in the Terai region.

About 70 % of the park is covered with Sal forest with the remaining, a balanced mixture of grassland, savannah and riverine forest.

The park famous for endangered animals like rhinoceros, wild elephant, tiger, swamp deer, black buck, ghariel crocodile, marsh mugger crocodile and Gangetic dolphin. Endangered birds include the Bengal florican, lesser florican, silver eared mesia and Sarus crane. More than 30 different mammals, over 200 species of birds, and many snakes, lizards and fish have been recorded in the park's forest, grassland and river habitats. A good number of resident and migratory birds are found in the park.

Located on flood plains of Sapta-Kosi River at Saptari and Sunsari districts of Eastern Nepal, this reserve is defined by the eastern and western embankments of the river.

The Sapta - Koshi River also changes its course from one season to another, the vegetation is mainly tall khar pater grassland with few patches of khair-sisso scrub forest and deciduous mixed riverine forest, the reserve offers important habitat for a variety of wildlife. The last surviving populations (about 100) of wild buffalo or arna are found here. Other mammals are the hog deer, wild boar, spotted deer, and the blue bull.

The reserve also assists the local economy by providing fishing permits and allowing the collection of edible fruits and ferns in season. A total of 280 different species of birds have been recorded in the reserve. These include 20 species of ducks, two species of ibises, many storks, egrets, herons and the endangered swamp partridge and Bengal florican.

The Koshi Barrage is extremely important as habitat for migratory birds.

Many species recorded here are not seen elsewhere in Nepal. The endangered ghariel crocodile and Gangetic dolphin have been recorded in the Koshi River.

Shuklaphanta Wildlife Reserve, located in the Far Southern West of Nepal in Kanchanpur district, predominant sal associated with asana, simal, karma, khair and sisso are found along the river side. Main grass species of the phantas are Imperata cylindrical and Saccharun heteropogon, used extensively by the local people for thatching.

The reserve provides prime habitat for swamp deer. An estimated population of 2,000 to 2,500 of this species is found in the reserve. Other wild animals in the reserve are the wild elephant, tiger, hispid hares, blue bull, leopard, chital, hog deer, and the wild boar.